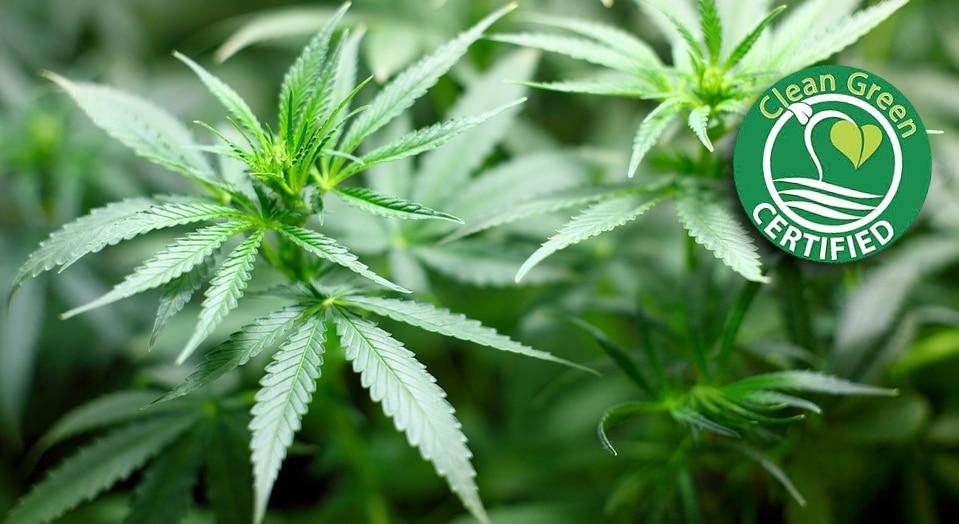 Organic cannabis. Two good things combined are even better! There’s just one thing: The U.S. federal government seems stuck in the 20th Century, because it still doesn’t recognize marijuana as a legitimate agricultural crop. That means that cannabis can’t legally be called “organic” — no matter how pure and environmentally friendly the practices used to grow it — because the term is federally regulated with the Department of Agriculture.

But there’s good news. The Clean Green Certified program was created back in 2004 as a way to regulate legal marijuana products that were grown using, well, organic methods. Clean Green Certified is now the #1 certifier, nationwide, for cannabis cultivated using sustainable, natural and organically based practices.

Chris Van Hook, who now runs Clean Green, was an organic agriculture inspector for the USDA in 2003. He got a call from “a little old lady in Pasadena” who wanted him to organically certify a pot farmer. The woman wanted to make sure she had clean weed for her seriously ill husband, a medical marijuana patient. But he couldn’t fulfill her request. The federal government issued a memo to all regional offices stating they were prohibited from certifying cannabis as organic, even though they’d previously been instructed to “treat it like any other agricultural crop.”

That’s when Van Hook decided he’d had enough. He founded Clean Green as an impartial third-party certifying organization. As a California lawyer, former abalone farmer, and a USDA organic inspector, he realized he was in a unique position to launch not just a business, but a movement.

“If the federal government was not going to allow us to certify that medicine was safe for the patient, I was,” he told Cannabis Now last year. “The idea behind Clean Green was always to be a national brand — at least until the federal government and the USDA come to their senses and certify organic cannabis production.”

Van Hook discourages participating growers from calling their cannabis “organic,” but their methods are in line with the USDA’s. “Technically, we can’t say it’s equivalent, and it’s not equivalent, but it’s definitely based on [USDA organic standards],” attorney Van Hook told The Stranger in 2014. “All we’re really doing is bringing the existing agriculture and food-processing regulations into the cannabis industry.”

The process is the same “as if they were getting certified for organically grown broccoli or tomatoes,” Van Hook told the Spokesman-Review in 2015. “It lets people know the cannabis was legally grown, in an environmentally responsible manner.”

Cannabis consumers “are sophisticated buyers, the same people who are buying organic food and organic coffee,” Van Hook told Slate last year. “Whether it’s medical or adult recreational use, you need to be concerned with the manne run which it’s grown, because you’re ingesting it.”

Truth be known, Clean Green’s standards go even farther than the USDA’s. The program does not allow the use of most synthetic pesticides and nutrients. But it goes beyond that: it also requires growers to use fair labor standards and sustainable cultivation methods. All participants must submit samples for residue testing to check for banned pesticides or fertilizers.

Until federal law changes, this is likely the closest thing to organic marijuana you can get — and rose, or a bud, by any other name is just as sweet. Clean Green has now grown to serve well over 100 customers. Clean Green-certified cannabis has been winning prizes in competitions like the High Times Cannabis Cup since 2010.

Uncle Ike’s has a growing customer base that cares about pesticides and sustainable cultivation. You can find Clean Green cannabis products from the following producers at Uncle Ike’s locations:

• Pearl Extracts produces high quality cannabis vapor cartridges — and unlike almost all other manufacturers, they use only 100 percent natural cannabis oil and terpenes. Additives, of course, can irritate your nose, throat and bronchial pathways. And let me repeat the importance (and the deliciousness!) of natural cannabis terpenes. Those flavors are real.

• Puffin Farm grows all natural, sun grown, sustainable cannabis in Eastern Washington. They specialize in quality flowers, including high CBD strains like AC/DC, which has close to a 1:1 THC/CBD ratio. But they also have, of course, THC behemoths like AK-47 and Amnesia (both 24 percent THC).