A True Story of Maraschino Cherries, The Mafia, Marijuana and Bright Red Bees 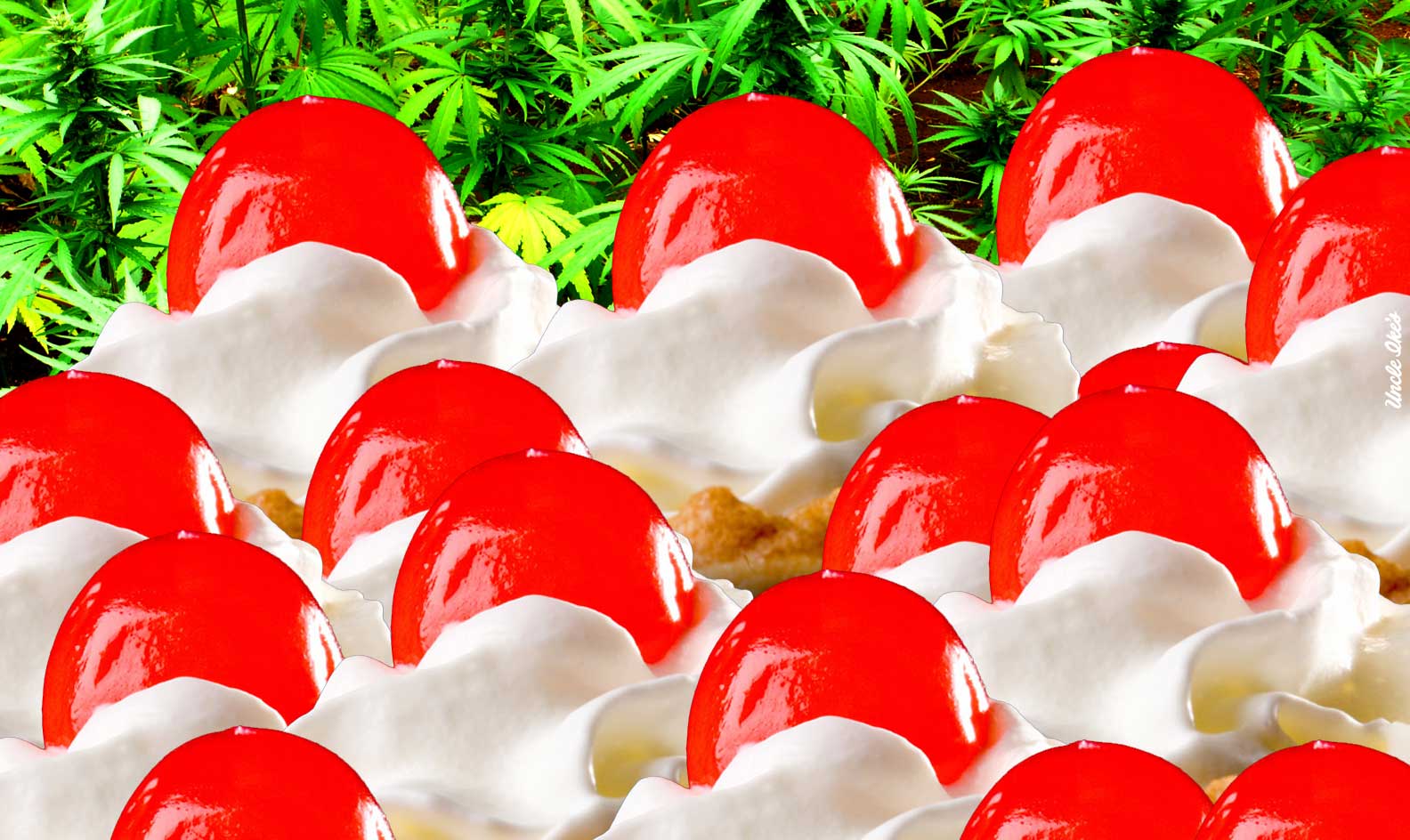 If I told you a story about a marijuana grow hidden beneath a cherry factory that was dumping so much toxic juice into Brooklyn sewers that local bees were turning bright red, you would mock me as being insane for proposing such an outlandish yarn. Nobody would buy it. No fiction writer could come up with material that good. Even a highly paid pot shop writer with the freedom to write anything.

In Washington, marijuana is legal. In New York, grows are hidden under cherry factories. For real. New York has some catching up to do.

Last week the third generation owner of Dell’s Maraschino Cherries, Arthur Mondella, killed himself while on the verge of getting busted. Mondella was looking at serious jail time not only for growing marijuana but probably for for tax evasion too. The New York Daily News claimed that the failure of a multimillion dollar pot grow would anger the mafia, but they didn’t provide specifics.

Screenwriters everywhere are probably clamoring to adopt this story in to a thrilling big budget movie or at least an episode of CSI. It has all the elements – illegal drugs, stacks of cash, the rise and fall of a small family business, mental illness and suicide, antiquated Rockefeller drug laws, the gentrification of Brooklyn, bees turning red … possible links to space aliens and bigfoot. Good stuff!

Let’s examine the maraschino cherry. Those under the age of 50 might not remember their dads dragging them to taverns and bars. No drinking alcohol if you were under age 14 or so, but you could have a Shirley Temple for sure! Basically ginger ale with a couple maraschino cherries and some grenadine syrup. They are definitely a relic of 1950s cocktail culture. And maraschino cherries have little nutritional value. Mondella was a PUSHER of UNHEALTHY sugary JUNK!

Dell’s supplied cherries to Red Lobster, Buffalo Wild Wings, TGI Fridays and Chick-fil-A – four places that I’m happy to say I have never been to.

Maraschino cherries are chemically treated. Yum! High Fructose Corn Syrup. Potassium Sorbate, Sodium Benzoate, Artificial flavor, Red #40 … Sulfur Dioxide. Here’s another movie idea: Get Morgan Spurlock (of Super Size Me fame) to eat nothing but maraschino cherries for one month and see what happens to his health. Be kind of nice to see him turn a brighter shade of red.

Back East things are more corrupt. People in Seattle don’t even know what a “bribe” is or how to “grease” somebody. Wouldn’t be polite. You gotta wonder who knew about Mondella’s big grow. The New York Times linked him to the red bee phenomenon in 2010. The authorities (or at least the media) were already on to him for illegal dumping of cherry juice five years ago! Masked the pot smell.

There is no way that the maraschino cherry business could be doing as well as it was when Mondella’s father and grandfather ran the place. Consumers are turning away from cocktails for kids and unhealthy junk food from the 1950s. Seen sales numbers for Jello lately? No wonder the guy was growing pot. Dell’s recently re-branded and upgraded their factory, too, spending big money.

Even the prospect of jail time and the destruction of a family business isn’t enough for most people to kill themselves. Perhaps Mondella’s karma was REALLY bad. His factory (the cherry one) offered private label services – essentially selling their cherries so a third party could stick their own branding on there. Their website claims that this system “Eliminates dealing with labor and employee issues.” Nice. They also provided a “state-of-the-art SQF level 3 certified and OU kosher certified manufacturing facility that provides customers with complete solutions under one roof.” And what is “SQF certification?” Not very thorough, I’m guessing. And was the marijuana growing in their secret basement lair certified Kosher too? I have the feeling the Rabbi never made it down there.

In New York pot is illegal and that means that every single pot person there is a law-breaker or an outlaw. I think 95% of everybody I’ve met in the business, legal or not, is cool. A good person just trying to make a living. I don’t know about this Mondella guy. I do know that New York State needs to get a clue. Make pot legal and suddenly the number of maraschino cherry factory owners with secret pot grows who are compelled to kill themselves plummets. And the tax dollars start rolling in. They don’t get that yet in New York.

Arthur Mondella was buried on Saturday, February 28 in a scene right out of a movie filled with stereotypes of Italian gangsters. As the New York Daily News reported: “The funeral music made clear, Arthur Mondella did it his way — for better and worse.”